Robin and David Kowalski barely recognized their daughter Bailey when she was visiting home in White Lake, Mich., in the spring of 2015.

Their perennially positive daughter, who was about to finish her freshman year at Michigan State, was sullen. She had suddenly decided to abandon her long-held dream of being a sports journalist, and she refused to tell her mother, in whom she typically confided everything, why.

It was not until October, after months of erratic behavior, that Ms. Kowalski told her parents that she had been raped by three Michigan State basketball players that April. The incident left her depressed and considering harming herself. She dropped out of college for a while and received counseling. She gave up sports journalism for good.

Last year, Ms. Kowalski, 22, who is speaking publicly about her case for the first time, sued Michigan State in federal court for violating her rights under Title IX, the federal law mandating gender equity in higher education, as a Jane Doe. The lawsuit asserts that Michigan State mishandles sexual misconduct complaints against athletes. One woman said two football players raped her in 2009, but she was not advised of her Title IX rights, the lawsuit said, and another woman said three basketball players raped her in 2010, after which the accusations were not reported outside the athletic department.

A Michigan State motion to dismiss the case is pending. A university spokeswoman, Emily Guerrant, declined to comment on the case while the litigation is ongoing but said Michigan State “is dedicated to making sure every student receives fair treatment and support when they need it.”

Ms. Kowalski has decided to come forward, hoping she can persuade other victims, at Michigan State or elsewhere, to tell their stories.

According to Ms. Kowalski, when a university counselor learned that the men who she said assailed her were members of the basketball team — a storied and treasured program that has played in 10 Final Fours, including this year’s — the counselor discouraged her from reporting it, the lawsuit said.

“If you pursue this, you are going to be swimming with some really big fish,” a staff member told Ms. Kowalski, the lawsuit said.

Ms. Kowalski plans to hold a news conference in East Lansing on Thursday, the fourth anniversary of the incident. A month later, she will graduate from Michigan State.

“I don’t want any other girl who has gone through this or who God forbid may have to go through something like this to feel for one second that they should be too afraid to come out and do something,” Ms. Kowalski said in a phone interview last week.

Her lawyer, Karen Truszkowski, said that a separate Title IX investigation initiated by the university last June had dragged on.

“It will not be resolved within a year,” said Ms. Truszkowski, who declined to discuss the substance of the investigation because it is pending. “That has consumed her entire senior year.”

Ms. Kowalski is still declining to name the men she says raped her on the night of April 11, 2015. All were members of the 2014-15 Spartans team, she said. She has not filed a police report, but is considering doing so. 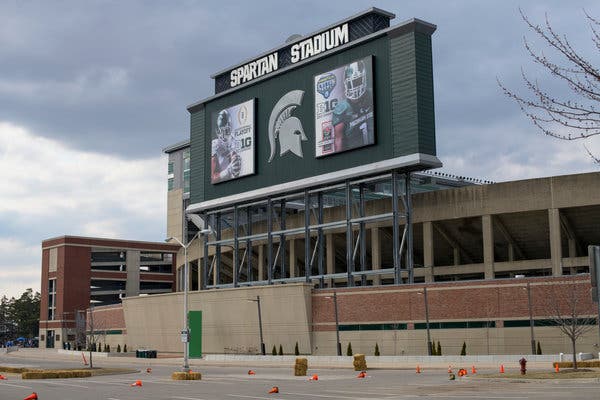 More than a year ago, Michigan State’s president and athletic director resigned after the depredations of Lawrence G. Nassar, the former university doctor who has been accused of sexual abuse by hundreds of women, including Olympic gymnasts, and convicted of sex c

The lawsuit states that the sexual assault occurred in April 2015 after an informal celebration at an East Lansing bar for the basketball team, which had recently returned from the Final Four in Indianapolis, where it lost to the eventual champion, Duke, in the national semifinals. (Ms. Kowalski, days away from turning 19, said she used fake identification to enter the bar.)

Ms. Kowalski’s roommate encouraged her to approach the players.

“I knew their stats, numbers, everything,” Ms. Kowalski said, adding, “She knew how I looked up to those guys.”

A team member invited Ms. Kowalski to his place for a party, and she accepted a drive to an off-campus apartment, the lawsuit said. When she arrived, there was no one else there, and Ms. Kowalski, who had already had trouble holding her glass at the bar despite not drinking much, had trouble controlling her thumbs to send a text, the lawsuit said.

The three players took turns raping her, the lawsuit said. She woke up later in the apartment and took a taxi back to her dorm.

Ms. Kowalski visited the Michigan State University Counseling Center roughly a week later, she said. The counselor she met with appeared to change her response to Ms. Kowalski upon learning that the men she said had attacked her were members of the basketball team. The counselor immediately insisted on having a second person in the room, the lawsuit said. Ms. Kowalski was not advised to seek a physical exam or pregnancy or S.T.D. testing, and was not made aware of her rights under Title IX.

With cases with “guys with big names,” she was told, according to the lawsuit, the best thing was to “just get yourself better.”

“She lived with that thought of, ‘Just get yourself better,’” said her mother, Robin Kowalski, in a phone interview last week.

When Bailey Kowalski first sued Michigan State last spring, the university rebutted her claims in a statement with significant and unusual detail. “We have not found any evidence or indication that she was discouraged in any way to make a Title IX complaint or a complaint to the police department,” it said. It also said that the university police eventually contacted her.

A day later, Michigan State’s former interim president, John Engler, said in a statement, “We regret that we provided an unnecessary amount of detail” in the initial response.

“They went out to the press and essentially addressed my lawsuit as a lie,” Ms. Kowalski said, “which basically was a message to anyone else coming forward with allegations similar to mine that, ‘If you’re going to do that, we’re going to completely exploit you.’”

After taking much of a semester off and receiving outpatient psychiatric treatment, Ms. Kowalski elected to return to Michigan State, believing that transferring to an unknown campus where she did not know anyone would have been worse. Her brother is currently a sophomore at Michigan State.

She suffers from post-traumatic stress disorder, she said, and felt she could never return to the vocation to which she had long aspired. She switched from a planned double-major in journalism and Spanish to one in biology. She hopes eventually to become a veterinarian.