WASHINGTON — If there was any school where her daughter would feel safe, Michelle Hoffman thought, it would be Holland Christian High School. Betsy DeVos, the famously religious education secretary, was educated there, and the school preached that its students would seek “in all endeavors to ‘do justice, love kindness, and walk humbly with their God.’”

But after her 15-year-old was sexually assaulted by her 17-year-old boyfriend, another student at the school, Ms. Hoffman realized how misplaced that confidence was. Instead of helping, the school’s principal called the assault “underage sex” and told her the school was “not taking sides.”

An ensuing lawsuit filed by Ms. Hoffman against Holland Christian has turned Ms. DeVos’s private alma mater in Holland, Mich., into Exhibit A as the secretary moves to overhaul the law that governs school sexual assault — and to bolster the rights of the accused while narrowing the responsibilities that schools have to investigate sexual misconduct.

The Holland case lays bare some of the biggest concerns about Ms. DeVos’s proposals for Title IX — the 1972 law prohibiting sex discrimination in educational programs that receive federal funding. On Tuesday, the Senate Education Committee will hold a hearing on responding to sexual assault on college campuses. But Title IX also applies to primary and secondary schools — like Holland Christian.

“We pray that ours can be the case that makes Betsy say, ‘maybe this isn’t the right way to go,’” Ms. Hoffman said.

Ms. DeVos’s proposed regulations have garnered more than 105,000 public comments, making Title IX one of the most contentious rules in the department’s history. Her efforts to strengthen the due-process rights for accused students have been assailed by victims rights advocates as gutting protections for those who have been assaulted, harassed or raped.

The particulars of the sexual misconduct asserted in the Holland case are no longer in dispute. In a text message, the boyfriend revealed that the Hoffman’s daughter did not like “the way that I’ve raped you.” He pleaded guilty to a third-degree criminal sexual conduct charge, and a judge ordered him off the Holland Christian premises.

The suit charged that those actions were in large part because Holland Christian failed to have Title IX processes in place, despite receiving hundreds of thousands of dollars from the U.S. Department of Agriculture through its participation in the National School Lunch Program — a little-known avenue through which private schools can skirt enforcement of federal civil rights laws while taking taxpayer dollars.

“This case should be a wake-up call for both private and public school families,” said Esther Warkov, executive director of Stop Sexual Assault in Schools, a nonprofit organization that publicized the lawsuit. “When the U.S. Secretary of Education’s own alma mater flouts its responsibilities we begin to understand the pervasive disregard for Title IX compliance that includes the majority of public schools nationwide,” she said. 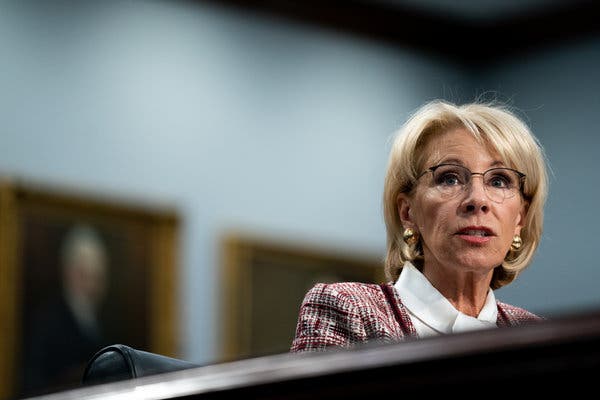 The lawsuit, filed in April 2018, charges that the school violated guidelines issued under the Obama administration, which were in place at the time the assault was brought to Holland officials’ attention. The rules required schools to investigate sexual assaults that took place off campus and take steps to protect accusers from their accused while an investigation unfolded. In 2017, before the Hoffman lawsuit was filed, Ms. DeVos announced that she would scrap the Obama-era guidelines and rewrite the law. She proposed new rules last fall.

The Obama administration’s guidance drew wide-ranging criticism, including from college administrators, as arbitrary edicts that pressured colleges to conduct quasi-legal processes with a presumed outcome in favor of victims. And in the last year, significant court rulings have aligned with Ms. DeVos’s efforts to provide a firmer legal framework for campus investigations.

The case, expected to go to mediation or a courtroom this summer, asserts that the Hoffman’s daughter suffered “severe and pervasive” sexual harassment that denied her access to her education. It argues that school administrators had “actual knowledge” of the assault, meaning that it was reported to officials with the authority to take action, and that the school was “deliberately indifferent” in its response.

Ms. DeVos has proposed to adopt the “severe and pervasive” standard for sexual harassment, along with legal standards that would hold school administrators responsible only if they had “actual knowledge” of sexual misconduct and were “deliberately indifferent.” Those standards are based on Supreme Court precedent and used in Title IX court cases already. But in administrative hearings, they would significantly raise the bar for holding schools liable for addressing misconduct compared with looser processes outlined by the Obama administration.

The new rules preserve some longstanding Title IX requirements, including schools’ obligation to have a Title IX coordinator and an established investigative process. They also outline new “supportive measures” for victims, even if they do not file complaints. They would, however, eliminate an Obama-era requirement that held schools liable for incidents that occur off campus and outside of a school-sponsored program or activity — a change that, had it been in place, would have technically alleviated Holland Christian of its obligation to respond to the claim.

Holland Christian does not receive funding from the Education Department, which enforces Title IX in schools and colleges that participate in programs it administers, but court cases suggest that it is still bound by the rules that apply to all education programs that receive federal funding. In 2010 case, a federal judge ruled that a Pennsylvania Catholic High School was required to follow Title IX because it received funding for meals and technology.

The Hoffmans’ lawsuit said that the Holland Christian had received more than $600,000 in federal funding through its participation in the National School Lunch Program, which reimburses schools for serving free or reduced-price meals. Currently, 4,700 private schools nationwide participate in the program according to Agriculture Department officials. All schools that participate in the voluntary program are required to comply with federal civil rights laws, department officials said.

But experts and advocates say there is little way of knowing if private schools actually are aware of their legal obligations — or care.

“This case has unearthed this whole set of protections that haven’t really been talked about, and that parents and private schools don’t know exist,” said Seth Galanter, director of legal advocacy at the National Center for Youth Law, who worked in the Education Department’s Office for Civil Rights under former President Barack Obama.

The Hoffmans initially turned to the Education Department’s Office for Civil Rights, which dismissed their complaint in July 2017, citing lack of jurisdiction. The Hoffmans learned months later, as they prepared to file a lawsuit, that the complaint should have been filed with the Department of Agriculture.

Unlike the Education Department, the Agriculture Department has enforcement power in private schools, but Title IX investigations in schools participating in the National School Lunch Program are rare. Officials said in recent years, the department’s office for civil rights has only investigated one such complaint. The agency declined to answer any other questions about its civil rights investigations. 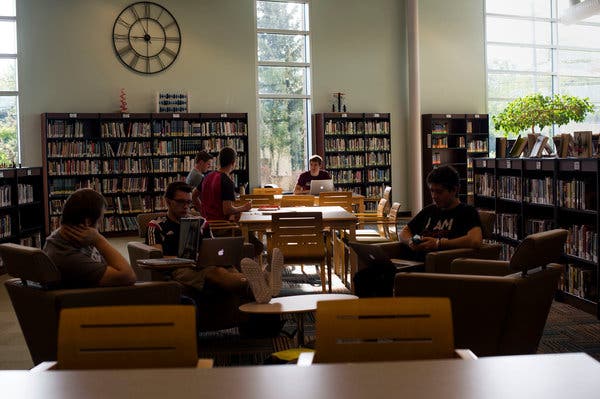 For decades, Title IX enforcement in private schools has been contentious.

A 1984 Supreme Court decision, Grove City College vs. Bell, held that Title IX only applied to a specific program, not the institution, that received federal funding. In response, Congress passed the Civil Rights Restoration Act of 1987, which clarified that anti-discrimination laws applied institutionwide. President Ronald Reagan vetoed the bill, and Congress overrode it.

Private schools are allowed to request religious exemptions from civil rights laws that conflict with their religious tenets. But Agriculture Department officials said they have not received any exemption requests in recent years from schools participating in the National School Lunch Program, including Holland Christian.

In its response, Holland Christian overwhelmingly denied the allegations.

The school admitted, however, that it did not have a formal Title IX process.

Gary P. Bartosiewicz, the lawyer representing Holland Christian declined to comment on Ms. Hoffman’s allegations, saying only that the school “will continue its defense of both the legal and factual allegations in this litigation.”

Karen Truszkowski, a Michigan lawyer who is representing the Hoffman family, also declined to comment on the case. But she said, “We’re at a real crossroads and Title IX is the accountability measure to ensure adults are protecting children.”

In the lawsuit, Ms. Hoffman said that after her daughter’s assault was revealed in the 2016-17 school year, she was in constant communication with Holland officials about her concerns, and that the principal and superintendent — who both have left the district since the suit was filed — did nothing.

Ms. Hoffman said she asked for her daughter and the boy to see each other as little as possible. The lawsuit said the girl was forced to see him in the hallways and in choir class, and he once brushed up against her. “He kept in proximity to her and made sure she was aware of it,” the lawsuit said. As a result of the interactions, it claimed, the girl was diagnosed with post-traumatic stress disorder and anxiety, and she missed school because of “overwhelming emotional crisis.”

Ms. Hoffman said that the school also failed to accommodate her daughter’s desire to enjoy school, but went out of its way to make sure the male student could.

When she expressed that her daughter was having academic difficulty, the principal said the girl’s grades “seemed fine,” according to the suit. But after the male student was barred from attending classes, the school sent teachers to his home to tutor him so that he could finish his senior year, the suit said.

At his sentencing, several Holland Christian teachers wrote to the judge asking for leniency, because he was a “good kid,” the suit said. No such letters were written for the Hoffmans’ daughter, the suit said, and the girl “had to face each day knowing that authority figures at her school supported her rapist, and not her.”

Ms. Hoffman said she hopes that her case can help ensure that victims are treated differently under the new rules.

“We do recognize that Title IX is not perfect,” she said, “but her changes will definitely be taking a step back.”